The boys tennis team hits it off in their spring season! 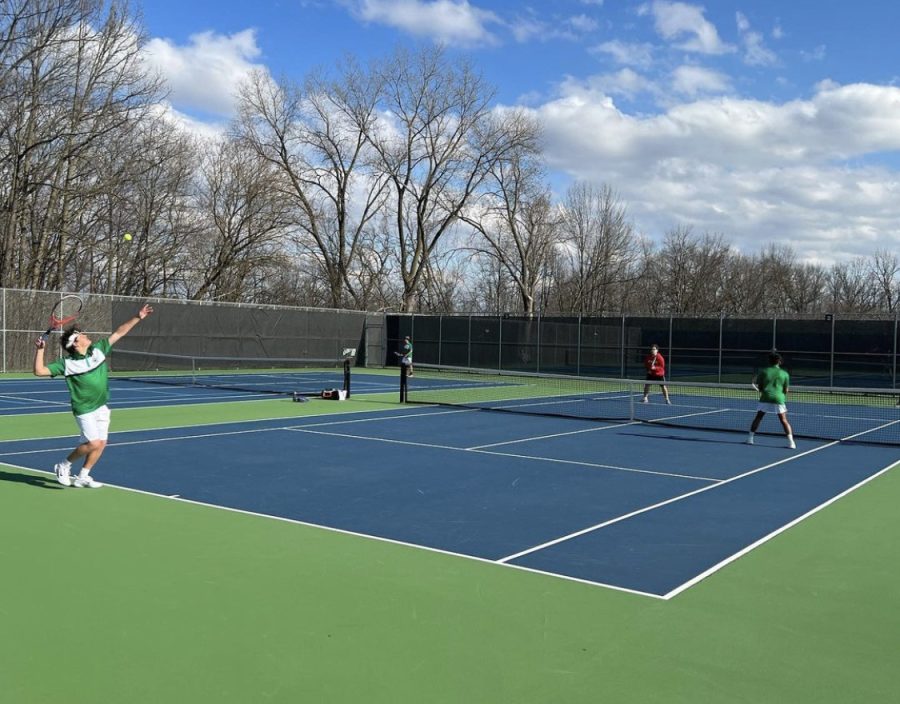 As spring rolls around, numerous sports are starting back up, and one of those sports is boys tennis. The boys have played two conference matches and have had one tournament, and while they have had a rough start to the season so far, they are bound to improve their record.

In their conference matches, the team has played against both Pewaukee and New Berlin Eisenhower. In the matches against Pewaukee, freshman Kieran Ortloff secured a win at 4 singles. In addition to that, freshman Brad Forrest and freshman Ben Turner won their match at 3 doubles.

Although the boys lost against Pewaukee with a final score of 2-5, they still put up a good fight. “Being one of the only wins against Pewaukee, I think that Ben and I played really well together. We had some bad moments, but those allow us to get better,” Forrest said.

New Berlin Eisenhower, on the other hand, proved to be a tougher opponent than Pewaukee. Against Eisenhower, the only win was from junior Corey Mattin at three singles, which resulted in a final score of 1-6.

It was a devastating match, but it won’t be the last time the boys play against them, as they will see them at the conference tournament. “Even though I was the only one who won their match against Eisenhower, I think that the boys still put up a good fight against Eisenhower,” Mattin said.

The team has had their struggles throughout the season as they have suffered two losses already, leaving their conference record at 0-2. Although they have yet to secure a conference win, they will pick one up soon. “Despite playing against some of the best teams in the Woodland Conference, I think that we played well as a team. We were just outgunned in terms of skill by just a hair, but nonetheless, we’ll pick it up and get our record back,” senior Tommy Young said.

In any sport out there, there is always a team that you lose to that you look forward to playing against again. It may be because you lost by just a couple points, or because they were a well matched opponent. “I’m really looking forward to playing against New Berlin Eisenhower again at the conference tournament. I had a tough loss against him the other day and I really want to beat him next time. I think that I’ve grown as a player and will be ready for him the next time we see each other,” junior Ryan Bilan said.